The Worshipful Company of Scriveners

The present Company of Scriveners is forty-fourth in order of precedence of the Livery Companies of the City of London. Its formal establishment as a corporate body governed by ordinances granted by the Mayor and Aldermen of London dates from 26 September 1373. These mediaeval regulations and ordinances for the governance of the Scriveners Company (as for all other Livery Companies) were to ensure the integrity in business, and the competence in practice, of those engaged in the craft thus strengthening their position and enhancing the confidence of members of the public using their services. Notaries appear as members of the Company from 1392 onwards, when it issued new ordinances to coincide with the appointment by the Archbishop of Canterbury as Papal Legate of laymen as papal and imperial notaries. 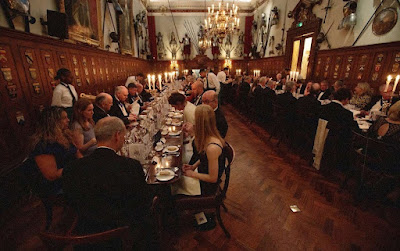 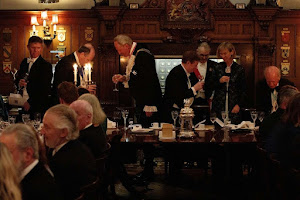 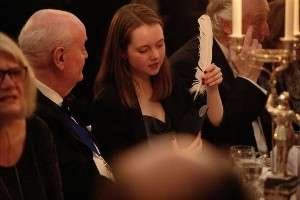 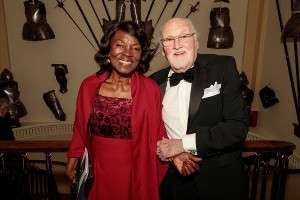 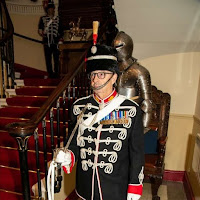 The Quill Pen Reception for the Sheriffs took place at the Old Bailey in The Lower Grand Hall on Monday 21 February 2021. The Master presented the Sheriffs with the quill pens with which they signed themselves into office, along with Scriveners' fountain pens, and added a donation to the Sheriffs' and Recorder's Fund.
Prizes were presented to the winners and runners-up in the annual Karen Nehammer Handwriting Competition for Schools, which had over 500 scripts again from four schools associated with the City.

After the disappointment of having to cancel the Company Carol Service in December 2021, the Master, Mr Barry Theobald-Hicks of Danbury was delighted to host the Company Burns Night Supper at the RAF Club on 19 January 2022. The venue was secured through the good offices of PM Mr John Tunesi of Liongam. PM Mr Bill Kennair addressed the haggis and the Master raised a toast to the Imortal Memory of the Bard. Mr Gordon Raeburn piped the haggis and entertained those present with traditional music and dance. Guests included Mrs Julie Fox, Master Chartered Secretaries and Administrators and Mr Paul Herbage, Priory Hospitallier, Order of St John. Some 40 guests enjoyed a four-course meal of cock-a-leekie soup; haggis, neeps and tatties; roast Scotch rib of beef and cranachan.
​​​​​​​
At the annual Quill Pen Lunch held at the Mansion House on 30 November 2021, the Master, Mr Barry Theobald-Hicks of Danbury, presented the Rt Hon The Lord Mayor, Alderman Vincent Keaveny, with the quill pen with which he signed himself into office and the Lady Mayoress, Mrs Amanda Keaveny, with a Scriveners' fountain pen. Joining the lunch were several Past Masters of Companies from the Lord Mayor's year as Sheriff, who were attending as guests of IPM and Scrivener Notary Edward Gardiner, and his wife Jo-anna. The Master presented a donation to the Lord Mayor's charities on behalf of the Scriveners Company.
The annual Autumn Dinner was held at Apothecaries Hall on Tuesday 12 October 2021 in the presence of HRH Princess Katarina of Yugoslavia
The principal guests were The Rt. Hon. the Lord Lingfield Kt DL and the Lady Lingfield. Other Company guests included: Mr Robert Flather, Master Stationer;
Prof Jane Anderson, CBE Master Apothecary; Lt Cdr Les Chapman, Master Mariner, Mr David White, Garter King of Arms; and Surg R Adm Lionel Jarvis, CBE KStJ DL
A carpet guard was provided by the Light Cavalry from the Honourable Artillery Company. The Master, Mr Barry Theobald-Hicks of Danbury presided.

Note: Images have been compressed for web viewing and may not appear in full resolution.